Zoltan at Semaphore Lakes:
“Ciaran, Will, Amy, and myself hiked to Semaphore Lakes on a clear, sunny day. The drive was long but beautiful. Passing Whistler Village we continued to Pemberton and beyond through the country side. We finally approached a long drive up Hurley River FSR, and eventually reached the trail head just 3 hours after leaving Vancouver. The hike up to the lakes was relatively easy. After an hour or so up through the woods we reached the meadows. The colours of fall were everywhere, even in the alpine. With only a few other hikers up there, we had a nice, quiet lunch, enjoying the views, with no distractions. Then we hiked around the meadows seeing the lower and upper lakes. Locomotive and Face Mountains were a dramatic backdrop at every step we took. We all agreed that this place is stunning and it would be well worth it to come back to summit one of the mountains. Driving back down, we got a close encounter with a black bear, as it crossed the road and then stopped for us as we passed it to snap a few pictures. Also, a bit further down the road, we had the same experience with a deer. Overall, this hike is very nice and I encourage everyone to try it once.

A side note about the FSR. It’s not that bad, considering my Honda Civic made it up. Your driving time (on the FSR) will be cut in half, however, if you drive a 4×4. I personally would not recommend going up there with any car if there is snow. 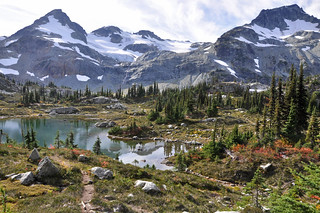