Steve v revisiting Bug Lake:
“Oddly, the night BEFORE hiking Bug Lake a second time, I was bitten by mosquitos at home and still have huge bites on me. On the trail, the bugs weren’t bad this time, but I was stung by a bee twice!

This hike was a grudge match, two of us had gone up before and not made it to the top. Eric and I went prepared this time with Frank (a hearty German visitor that had cycled much of the Elaho and Squamish backroads).

This time, instead of walking an extra 4 km on each end due to a slide blocking the road (the tree, however, was cleared) we took bikes and cut that time way down as we rang bells and yelled to scare off any bears we might overtake.

The hike itself was harder this time (for me), and I don’t know why. I found myself out of breath early but I guess it is the second highest gradient listed in 103 Hikes so maybe I shouldn’t be surprised. Unfortunately there was high cloud and later rain, so like the first time, it was a bit of a dark hike and slippery on the way down.

So, is a lake with such an un-appealing name worth doing? I’d say no, not if you just go to the lake anyway. Way too much drama to get there, and minimal payoff save for a few wide views and a mediocre lake. However, maybe what we did would be comparable to entering the shipping entrance of the Taj Mahal. Apparently the famous mountaineer John Clarke considered this area his favourite when accessed from the other side. I get the feeling that like many 103 Hikes, we just got to the door but the payoff was another 5 km away.”

Steve v at Bug Lake:
“This trip was doomed from the start. Pouring rain, and no intel regarding how far we’d get in a 2WD. Despite those warning signs Eric and Kim joined me for a trek into the unknown, to a place with a foreboding name.

The drive most of the way was wet, and muddy but mostly without incident save for a few logging trucks. However, about 4km from the trailhead we hit a rock obstacle and worked our way over, only to hit trees making further driving impossible. We got out and hoofed it.

The trailhead was almost impossible to find, but once we did and got past the first 200 m, it became a decent trail, though steep and muddy… and buggy. We climbed and climbed through what looked like moss and old growth and for some reason Kim got most of the bugs. We never did reach the lake due to the extra 4 km each way and impact to our turn around time, we made it about 60% of the way up the actual trail. I’ve rarely been so soaked through my boots. We finished off the adventure by helping a crashed truck driver fix a flat and then went for BBQ in Squamish.

The unfortunate kicker is that this is one of my goal hikes to complete the 103 Hikes book… so I have to go back. when I do I’ll probably aim for better weather and bring a mountain bike.” 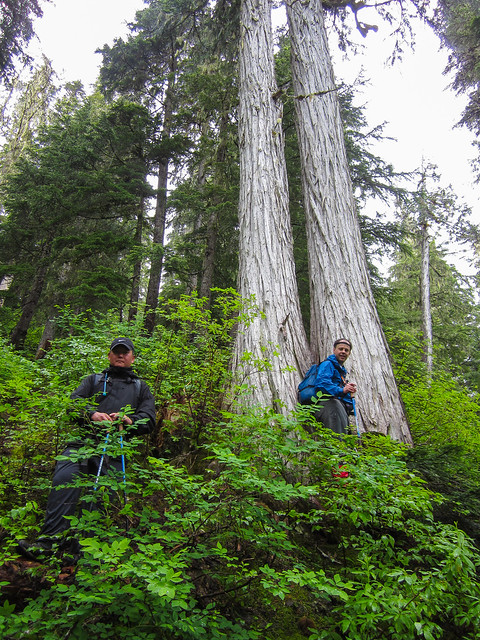