Eugene at Sigurd Creek:
“The gloomy forecast did not deter our group, as 7 of us set to explore the upper portion of the Sigurd Creek trail.

Driving to the trailhead was a breeze, as the Squamish River road has seen lots of improvements in the last couple of months. Most of the potholes are now gone, and, apart from the last few kilometres of gravel, it was all new asphalt.

The trail itself is well maintained and clearly marked. From the trailhead, it took us slightly over an hour to reach Crooked Falls. Even though the waterfalls have lost about half of the volume since May, they were still quite spectacular!

After taking pictures of the waterfalls from different angles, we returned to the trail junction and proceeded along a fairly steep section of the main trail, just past the first viewpoint. Finally, the trail somewhat leveled up, as we reached another jucntion. We took the left fork (toward Ossa and Pelion) and proceeded along a somewhat marshy/wet area sprinkled with blueberries. As the trail approached the creek (shortly before the second viewpoint), we found a good spot for lunch right next to the cascades.

Finally the trail leveled up as it reached the second view point (which we almost missed). Unfortunately, as we were proceeding further along the main trail we bumped into two wasp nests and all of us got stung. The first (larger) nest was about 10-15 min past the second viewpoint where the trail was crossing an open area densely overgrown with bushes and Devil’s Club plants. The second one was about 5 minutes further along the trail. Apparently the area is prone to wasps, as they were mentioned in a couple of older trip reports in 2005 and 2009.

At this point, we abandoned our plans for the moraine camp and turned back. The problem was that we had to pass the nests again, as an alternative would be to do bushwhacking through the stinging Devil’s Club plants and potentially other wasp nests. And, unfortunately, not all of us had long pants. So we put on all the clothes we had and quickly ran through the area as a compact group with more lightly dressed people staying in the front. This strategy proved fairly successful…

In this ordeal, everyone showed an enormous level of cooperation, as people were sharing their anti-histamine supplies and helping each other to inspect/remove the stings. Thank you Jaime, Katarina, Milie, Alice, Tu Loan, and Ellie, for keeping a cool head, you are awesome!

The way down was somewhat slower than going up as many portions of the trail were fairly muddy and slippery. As the weather improved, we caught a decent view from the second lookouts. However the Pelion glacier has substantially receded since May and was barely visible.

I’d like this report to serve as a reminder to all the “minimalist” hikers about the importance of being prepared for wilderness. One can encounter wasps even on the most-travelled routes; perhaps, some of you remember a nest on the Lynn Peak trail (!) a few years ago. It’s always a good idea to carry a long-sleeve jacket and long pants with you even on the hottest day; you never know when they come handy…”

Pardeep on Sigurd Peak:
“For a tougher trip I was quite surprised that I was able to get five of my buddies to wake up at 5:00am for a hike. Bala ‘The Baritone Baller’ Kumar, Oudi ‘Owly’ Cherfi, Mark ‘MC Pirogi’ Bondyra, Mark ‘Dragonfly’ Jenkins, Ross ‘Ramblin’ Rose’ Polutnik, and myself P. Diddy Montaigne’ made good on our collective word to reach the summit of Sigurd Peak or Station Rose as others may know it as.

The trailhead can easily be reached with 2WD vehicle; for driving directions visit the Club Tread page for Sigurd Peak, https://www.clubtread.com/routes/Route.aspx?Route=1121. The trail initially starts out along an old road bed, but quickly it veers right off into the forest. The trees that I saw during this were awesomely huge and beautiful! If the late great Randy Stoltmann’s name is associated with an area, you can expect to view some majestic cedars.

The trail is for the most part quite steep; think of doing the Grouse Grind for about nine hours; there is no gondola! I love steep slopes, they’re something so cathartic of pushing yourself physically through an old growth forest and seeing views of the Squamish River Valley and Ossa/Pelion Mountains.

At about 1170 m elevation, the route pushes North around a bluff section, before curling back East, and then heading up the main East running ridge system. Three of the group followed that route, while three went South and then East. I was with the group that went South; it was an interesting choice. We quickly had to start veggie belaying, and eventually were cliffed out. I would recommend not going this way, haha.

The East Ridge itself is quite broad and has great views in all directions; that’s if you’re not socked in. Though the clouds pushed in and out sporadically, that which I did see was superb! The final section of the summit ridge was heavily corniced. I would suggest just sticking to the middle and avoid any complications may arise from travelling too far to the edge of the ridge.

For a group of six young opinionated males, we worked well as a collective. I really enjoyed this trip with my friends, and would like to thank them all for coming along! The next trip? Tzsil Mountain near Joffre Lakes, or something in central Cheam Range.”

Steve following Sigurd Creek:
“I hiked with Ming, Dennis, Chad, and Jessica to the knoll on the Sigurd Creek trail near Squamish. On 2 attempts in previous years I got no further than Crooked Falls in May due to snow. This time, no problem due to snow or windfall. That being said, the trail was a bit buggy, and quite steep. Despite a more open view from the knoll, and more broad look at the huge cascading falls, the Crooked Falls viewpoint at the mid-point remained the highlight. This has to be one of the best falls viewpoints I’ve been to in the Lower Mainland, partially because you can get right next to them. Note that the logging road forces you to check in at a construction station, and the construction site saw fit to sign a short-cut for the trail: ignore it and follow the usual trail descriptions (we used 103 Hikes)” 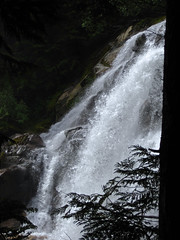