Chris N. at Needle Peak:
“My old 103 Hikes book says to park at the highway maintenance yard and cross the creek behind the large building there. However, the “No admittance” signs indicate that the authorities don’t want you to do that. Instead, park on the rough pipeline access road where there is room for about 20 cars. To find the trail, walk about 10 m west of the creek crossing. The route is easy to follow. There are many secondary trails on the ridge before the Flatiron / Needle junction but you can’t get lost. After the junction, there are only 2 scramble-y spots. The first is near the top of the first step (visible from the junction and well-flagged) where there is a bit of an overhang at waist level. The second is just before the summit in a little vertical gully with plenty of foot placements. Neither has any exposure. The summit is small and might be nerve-wracking if it’s really windy. Luckily we had no wind at all. On the way up, note the occasional landmark so that you take the correct route down. This seems to be a popular hike – we encountered about 40 people excluding the big school group. The lunch wagon at the rest area at the base closes for the season at the end of September.”

Danica on Needle Peak:
“It was a hike of many firsts: my first time organizing a callout, taking part in a Wanderung hike, and hiking in the Coquihalla region. Mike and Bobby answered the last minute callout and after a slow start (note to future organizers: King George Station is a terrible meeting spot as there is limited all day parking nearby), we made it to the trailhead. As per other reports, the highway exit is unmarked. After you go through the tunnel, the exit is right before Yak Peak comes into view. Don’t get distracted or you’ll miss it like we did. The trail is well marked through the forest and up to the base of the summit. There are about 3 scrambling sections to reach the summit. The first required awkwardly ducking beneath an overhang. Coming down the guys did some graceful butt-sliding. We found the UBC VOC instructions to be helpful in navigating the scrambles. Overall a great first Wanderung hike!”

Anita B. on Needle Peak:
“Five of us ventured out to Coquihalla Summit Recreation Area to explore the trail to Needle Peak and Flatiron. Despite the foggy start in Vancouver in the morning the skies cleared up just past Chilliwack. It was a crisp and sunny day on the trails. When we got to Needle Peak the last scramble was a bit of a challenge and only part of the group made it to the peak. After completing Needle Peak we continued to Flatiron which was a quick 40 minute hike to the other ridge. The trail conditions were great and fairly well marked. Beautiful views and we even managed to spot Mt Baker off in the distance. If you head out this way be aware that Exit 217 on Highway 5 is not marked.”

Chris M. on Needle Peak:
“A very enjoyable night on a mountain. Susanna, Glen, Jenn joined me to sleep at 1,947 m, along the summit ridge of Needle. Though a bit hazy, the views were good and the weather warm. Snow starts after about 20 minutes along the trail. There are some rocky outcroppings along the first ridge but mostly snow covered. The summit ridge and both scrambles are completely bare. With overnight bags on, there was one awkward spot on the first scramble, but we worked together as a group and sailed through. Animals stole my liner socks during the night – we couldn’t decide whether the thieves were birds or marmots.”

Chris M. on Needle Peak:
“No one was able to join my Gamuza idea. So it was easy for me to change my mind and go up Needle Peak instead. The westbound side of the Zupkios pullout is closed anyway. Snow starts on the trail within the first 15 minutes. But footing was easy, I wore trail runners for the entire trip. Once you start the first scramble it is only on rock the rest of the way. I camped on the final ridge, only minutes from the summit, beside a pretty little tarn. The scrambling is fairly simple, when staying on route! The weather was good with just enough wind so there was NO bugs.” 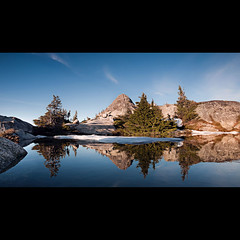 Steve on Needle Peak:
“Of the hikes outlined in “103 Hikes” I think Needle Peak broke my Top 10. On a perfect day, I went with 4 well-matched Wanderung companions to a Coquihalla trail I thought was outside of my dayhike driving range and expected to get back late. The drive time really was not that bad because none of it was not highway (no logging road). We had dinner on the road and still made it home by 8 pm. More importantly it was well worth the effort.

Unlike many trails where 90% of the journey is a slog for a 10% payoff, this trail is 30% nice forest, and the other 70% is scenic ridge walking (with a few short scrambles thrown in). Every direction from Needle Peak is photo worthy, and though the “scrambles” did make my sphincter pucker for a few tense moments, they really were not that bad and the exposure was minimal. On this date, no bugs, and no snow except a few small patches. We encountered a large hiking group that included well know Wanderunger Grace, and in the parking lot met with Larry who was doing Yak peak who joined us for dinner at the Wildcat.

The only thing I can compare this hike with is one of my favourites: the Rim Trail at Cathedral Lakes. I give it a solid 2 thumbs up. Add this one to your list of trips this Summer (or even do it now as many other great destination are still under snow).”

Irina on the Flatiron:
“Eric, Ahmad, Chris, Cara, Erez and Tareq joined me for this trip to Flatiron in the Coquihalla. Despite drizzle following us from Vancouver, it turned out to be a wonderful day in the mountains complete with great views and excellent company. No snow tires were needed on the Coquihalla. We put snowshoes on right from the start and initially followed the marked summer trail. The bottom part of the trail is well-packed and would be fine with crampons as well.

First following new and old ski tracks, then breaking trail, we were in the open in under an hour and continued south along the ridge, enjoying occasional breaks in the clouds. Due to above zero temperatures, the snow was quite heavy but not icy. Saw two small avalanches run down the steep NW side of Needle peak and felt happy we were a gully away. Multiple avalanche traces on Needle and Yak peaks. With plenty of time to spare, we often stopped to chat, laugh and indulge in the surrounding views; at the end of the hike my GPS read that we spent 2 h 40 min standing and 4 h 10 min moving.

From the bowl below the final ascent to Flatiron, five of us went around the cornice on the left side, while two took the route on the right along the rocks. Met up at the communications tower for lunch in a sudden complete white-out; didn’t linger for long there, but as we got down to the ridge it cleared up again and became much warmer, so we took our time jumping small cornices and playing snowball fights. Debated for a bit whether we want to scramble part of the way up the Needle Peak ridge or follow the ridge SE, but decided on rather getting home earlier. Got down to the car and anxiously turned the radio on to learn that Canada won the gold medal match. Woo-hoo!

Huge thanks to Cara+Chris and Eric for driving 400 km in a day.”