Stacey A. at Marriott Meadows:
“A long-weekend two-night trip to Marriott Meadows and Rohr Lake. Four of us made the trip and were fortunate to have a driver with 4WD 🙂 It’s a short access road to the trail head if you have to walk though. Lots of bugs the whole time: mosquitos, black flies, deer flies, you name it, they were biting us. I would suggest bringing bug hats at the least (or waiting until later in the season). One of our crew had a small over-bed mosquito net that pretty much saved us as we could eat under it, etc. That being said, my skin was mostly covered, I used almost an entire small bottle of Ben’s 30% deet spray, and I still managed to get almost 100 bites! The others seemed to have fared a bit better.

First night was spent at Rohr Lake. The trail to Rohr Lake is muddy in several spots. The last steep hill up to the lake is definitely muddy and slippery and requires care! Alternatively, you can head up the boulder field next to the path with ease. There seem to be about 6 spots for camping at the lake. No toilet or cache, and the trees aren’t ideal for hanging food. Lake is cold but swimmable! The hike to Mt. Rohr takes about 2 more hours from the lake. It’s mostly boulder fields, but well cairned for the way.

Second night was spent at the lake just below the Wendy Thompson Hut (we heard the hut was overfull with a large group of 22, plus others). Again the hike was muddy with a few creek crossings on logs. The terrain was varied with forest paths, meadows, and boulder fields. No apparent obvious camp spots on the lake, just put up our tents on a dry patch of grass. Lots of hikes from here to explore. The lake was cold but refreshing and great for swimming!

All around beautiful views for both areas!”

Ben V. on Mt Rohr:
“The wind was calm, the skies were blue, and the snow was perfect for snowshoe travel. We left the city eager for some time in the alpine. The route to the lake was mostly easy to follow along tape, ski tracks, and some nearly buried orange markers. We found the sign for the turnoff to Rohr Lake just above the snow at ankle height. A bit of routefinding was necessary from this point up to a small clearing below the lake. From the lake it was smooth sailing straight up the valley floor with plenty of alpine scenery to enjoy. We approached the summit ridge from the northwest and took a nice line to the top with only one excessively steep section requiring us to drop down on all fours. The summit was surprisingly hospitable and we were able to sit down and recharge while we soaked up the panoramic views. A big thanks to Adrian and Dan for making this a great trip.” 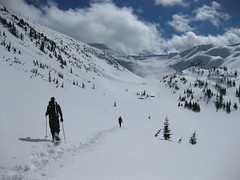