Bob H. on Mt Nutt:
“Mount Nutt is in Golden Ears Provincial Park and the trail was made between 2011 and 2013 by the Ridge Meadows Outdoor Club. The first 1.6 km from the parking lot is a very gentle slope on a gravel path (East Canyon Trail), which is a good warm up. At the 1.6 km mark, you take a right turn into the forest and the vertical gain really starts – suddenly you find yourself heading up fast. The trail is very well marked (can be slippery when wet). For a while, the climb follows a small creek, which drains a small lake further up.

The lake is nice and the area around it gives you a little reprieve from the gruelling climb. Soon after leaving the lake area, the climb continues. Eventually, we reached a viewpoint (680 m), which offered a pretty good view of Alouette Lake.

Continuing along the ridge, you are treated with about 4 more viewpoints overlooking Golden Ears, Evans Valley, Edge Peak and Alouette Lake, among others.

Photo album of hike is here

My blog, with trailhead/parking location and route stats, is here.” 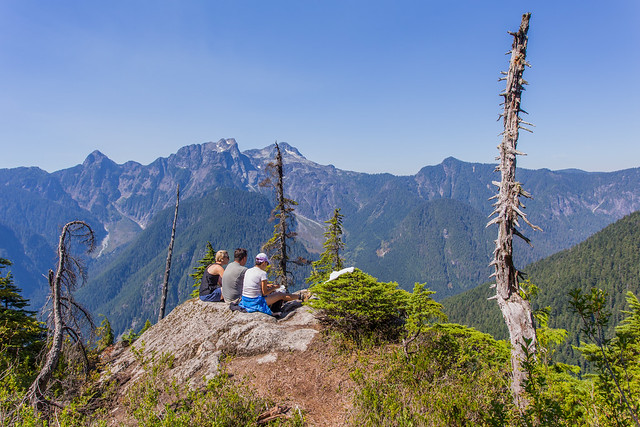 Eugene Y. on Golden Ears:
“This route has a well-deserved reputation of a most challenging trail in the Lower Mainland. The trip felt much longer than 24 km, as it also involved almost 2 km of cumulative elevation gain (according to our GPS). Traveling at a brisk pace, we made it to the peak in 5.5 hours, however, the return trip took us well over 6 hours, as some parts of the trail were quite slippery. The steep middle portion of the trail was particularly sketchy on the descent; it would definitely benefit from some additional foot steps and permanent chains or ropes.

Panorama Ridge below the shelter was mostly snow-free, however we had to cross a large snow field on the way to the peak. The condition of the snow varied. An overnight hiker told us that it was somewhat icy in the morning hours. However, the snow got softer by midday, even though it would still require some efforts to make foot steps. We had to carefully navigate the snow field in order to avoid the steeper portions. Even though we’ve seen a few groups having made it to the top without crampons, many of us were really happy to wear microspikes.

Trekking poles (or even an ice axe) are really needed on this snow field. In fact, even with snow poles, some of us found it difficult to perform a controlled descent. Using poles for stopping yourself while sliding definitely requires some practice; moreover, poles can easily bend or even break if not held properly, as some of us discovered.

The final scramble to the top was, perhaps, the most enjoyable part of the route. We were lucky to get some really dramatic views through the fog.

Overall, this was quite an epic trip with a wonderful group of people.” 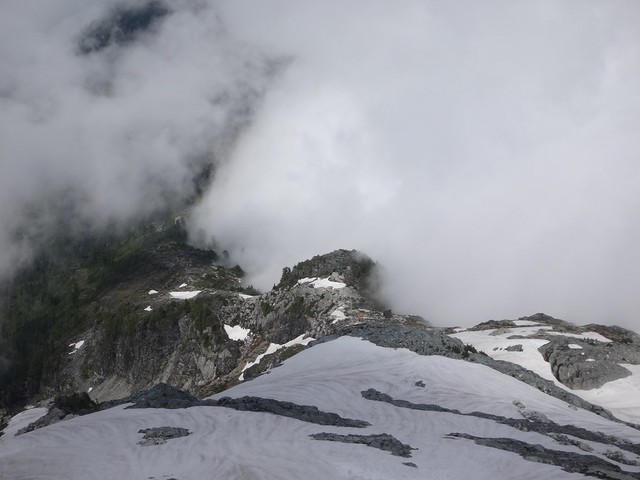 Chris N. on the Alouette-Stave trail:
“Last Saturday was one of the most thoroughly rainy hiking days I have experienced. It was with trepidation that we drove up the Florence FSR towards the trailhead. It’s 2wd the whole way but it does get rougher after the 11 km mark and traction could be an issue on the rocky uphills. Watch your odometer carefully since it can be tricky finding the right turn-off – it’s around 19.6 km on the left. About 200 m in, there are 2 locked gates but lots of parking. We walked down the road to the last switchback where there’s a lot of flagging tape marking the well-trodden track of the Robie Reid trail. Multiple streams poured down from the slopes above and the trail was a creek in places. There were some overhanging branches in places but not a lot of blowdown. The major creeks were almost topping the bridges. We found the cabin after a brief bushwhack but never did find the junction with the Alouette-Stave Lake trail (bivouac.com mentions that the intersection is at 49.39176, -122.32243 but I didn’t have that waypoint with me). We went as far as the Alouette River (which was raging!) before calling it a day.”

Steve v. on Alouette Mountain:
“This was my 100th hike of the 103 Hikes book (5th edition), and one I wasn’t looking forward to. The reviews from people I knew were not positive, and it was slated to be a full 9 hours for minimal payoff. However, I’m happy to report, it exceeded my modest expectations.

I think for this hike, we hit it on the right day, with the right people. My trip partners (Laura, Lisa and Stephen), all appreciate more than just views. This trail offers a ton of forest walking including old growth and plenty of fertile mushroom areas (not to mention abundant berry patches on this trip!). The temperature was starting to feel less like summer and more like fall which was perfect for the long ascent.

The Blanchard Needle was impressive and right in your face across a deep divide, but I think to make this trip worth the time spent, you have to do the Lake Beautiful side trail (which does not add distance, it is just a choice. In there were the best parts of the old growth. To not do that, 90% of your trip feels just like sections of the Norvan Falls and Lynn Peak trails.” 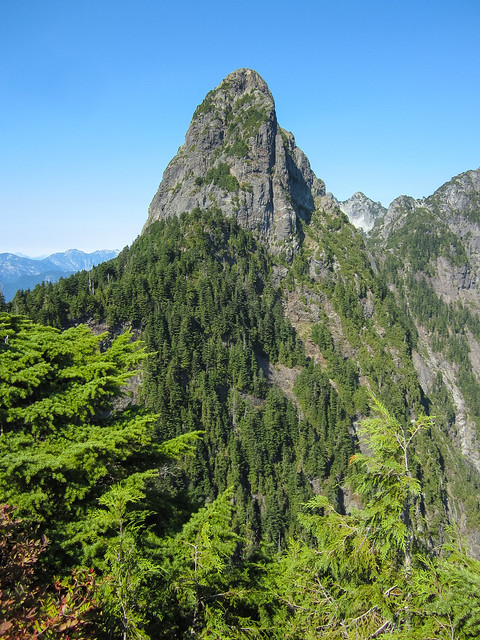 Kamen at Alder Flats:
“Four of us set out on a slightly overcast day to explore the approach to Golden Ears. The sun was out and shining when we hit the trail. Light conversation followed as we made good time hiking this fairly well-maintained and not-busy-at-all trail. Some of the bridges and boardwalks were in various states of disrepair which were easily circumvented due to the dry weather lately. We hiked 20 mins past Alder Flats until we got a viewpoint with a fantastic view of the Ears and surrounding mountains. We enjoyed the sun and views for awhile before heading back to the car and back to the big city.”