John K-S in Tetrahedron Park:
“Only two Wanderungers on this trip. We caught the 5:30 ferry to Langdale and quickly proceeded to the trailhead. We needed chains and 4×4 and GPS to find our way up. Skied in and arrived at Bachelor Hut around 10 pm or so with a large group of 9 showing up after us. Saturday went to Edwards Cabin and again another group of 11 came after us. Sunday skied to Steele Cabin and climbed Mount Steele and returned to Edwards Cabin in the afternoon and played Settlers of Catan in the evening. Skied out on Monday. Beautiful weather all weekend. Highly recommended trip. Check Tetrahedron website to see if large groups are planning to go up for the weekend. We had around 15 people per cabin for the Friday and Saturday night and it was quite comfortable.”

I wasn’t aware of NcNair Cabin which was a treat to find near our destination. It seems most people in winter head to Edwards Cabin and some to Steele Cabin. The trail to Edwards Lake was broken but there was again lack of markers but might just hidden in snow. It could be better in summer.

After Edwards Cabin, we broke the trail towards Chapman Lake. The trail crosses Chapman Creek about half way but we missed the turn and we became on the other side of the lake. We reached a creek that we couldn’t cross. We had four options: return to Edwards Cabin, turn back and look for the bridge that we missed, camp where we were, or cross Chapman Lake. We chose the last one. The lake was melting in some sections but we managed to cross it without a problem but I expect it will not be crossable any more soon. McNair Cabin was in good condition and it is located truly in serene location.

Our objective was to summit Panther but I was pretty exhausted from the night before. I also had some concerns of crossing the lake on the next day and the tight schedule for the ferry. I think this is an awesome place to spend an overnight if not more. 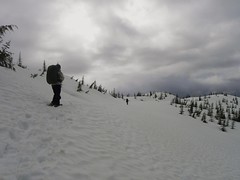 Chris on Alpen Mountain:
“Cara, Darcy, Dean, Mathieu, Roberto, Siegfried and Tania joined me in a search for the Hidden Valley Cabin on Alpen Mountain just east of Squamish. The Mamquam River Main (not the same road as the Mamquam Road that accesses the Elfin Lakes trail – this one is unsigned and just after the parking for the Chief) seems to see a fair amount of local traffic and was drivable to the Alpen Rd. The gate here was open so we drove in and parked just short of the first waterbar (200–300 metres up). Despite ferocious winds on the 99 and in Squamish, we encountered only light breezes even in exposed areas. But temperatures averaged around -10 C. We followed the main road but made a wrong turn about half way up (there are a lot of spurs) which lead us to a dead-end. After an attempt to cross-country to the main road, we gave up and back-tracked to the main road. Part of our party headed higher but still didn’t reach the cabin (locals said that it would have taken 4 – 4.5 hrs from the bottom). The snow varied from a couple inches at the cars to 2 feet of weightless powder around 1200 m.” 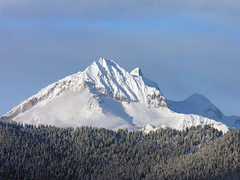 Chris at Phelix Creek:
“Andrew, Cara, Gloria, Lucy, Midori and Ribeka joined me on a rather wet trip up to the Brian Waddington hut in Phelix Creek. The Blackwater Road was in good 2wd condition with minor potholes and a small amount of slick mud. The Phelix Creek Road is rough 2wd for a couple hundred metres before it becomes fully 4wd at the remains of a rock slide – park 2wd vehicles at a sign warning about mudding about 200 m up the road. We all piled into Andrew’s Jeep and drove to the end of the road (almost as fun as the Lone Goat trip). The trail is well marked with reflective orange metal tags and snow patches started early (1200 m). It took almost 3 hrs to hike / slog / snowshoe to the hut (only 4 km). There was up to 2-3 feet of snow in places but the lake was slushy and not yet frozen (1700 m). Temperatures never dropped below freezing even at night and it rained / drizzled almost continuously. The cabin is outfitted with only a small (size of a large pot) portable white gas heater which did little but fill the hut with fumes so it was soon extinguished. The hut was clean and, because the surrounding hills often have high avalanche danger, provided with much reading material (check out the outhouse log book) and many sets of playing cards. By morning about 6″ of snow had melted off and several people headed up the valley for a bit of exploring before we headed back to the trailhead. The hugely variable freezing level makes this time of year tricky to go hiking.”