Steve v. at Brunswick Lake:
“It turns out that the trail beyond Deeks Lake only gets better. None of us actually had high hopes but were game to attempt to bag this one (me especially since I’d failed to summit my last two hikes). We were very pleasantly surprised. After Deeks Lake, the trail levels off and gets almost alpine and took us to two very scenic lakes with views of Hanover, Hat and Brunswick mountains (we waved at Rex doing Brunswick, but he did not see us according to his Facebook post).

My great hiking companions Sophie and Jacqui were super well matched for my pace and gear and we did what was expected to be a 10 hour+ hike in 9.5 hours, with time for a meal at Park Royal.

I want to thank all the people that gave us tips about the recent conditions (people from Club Tread, Meetup, NSH, and Wanderung). There are three river crossings and a sketchy snow slope but as it turns out, we timed it just right. Since last week, the bugs seem to have subsided and the water levels dropped enough for us to carefully cross logs and rocks. As for the road, the gate was open and though a 4×4 would have saved us hours, we actually could have knocked off maybe 45 min with a regular car were we willing to risk the gate being locked (as the sign warned might happen).

The snow slope obstacle that we feared had melted since last week and was doable by going along the shore instead of risking a slide. And do it when no clueless dog owners are around: Jacqui very nearly was knocked off to serious injury by a dog, and different dog later got under my feet on a steep downhill where I was told “just step on him” by the owner. Ya that would have been stable… (pet peeve of mine). Source of aggravation #3 were the people that had a breakfast fire as we arrived at Deeks Lake on the way up. We could smell it. Five hours later it was still warm and being billowed by the wind and could easily have ignited the surrounding dry foliage. However, even these minor annoyances combined were not enough to curb my mood on this great trip.

Lastly, should you choose to check out this trail and are really fit, you may want to consider doing a cross over (key exchange) or one-way hike through Hat Pass to Brunswick, it felt silly not to push forward, but then again this would have been a great place to camp.” 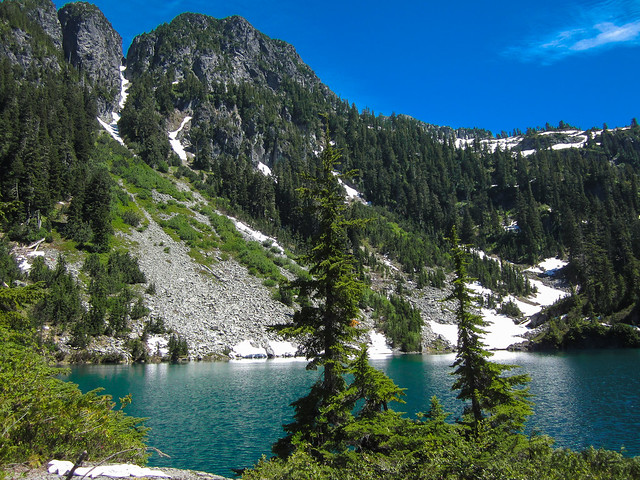