Ben V. on Elk Mountain:
“Four hikers set out at 10:00 in a medium density fog on yet another unseasonably warm winter day. The trail up to the 1200 m mark was clear without a trace of snow. The last portion to the ridge top was spotted with frozen snow in the forest and slushy snow in the open areas. The ridge top was similar, with snow depth gradually increasing as we progressed. We stopped for lunch at 12:45 on an open bump with a large cairn. There we were rewarded with a few views when the clouds broke briefly and revealed the surrounding peaks that had been hidden all day. We went a bit further to the next highest point to enjoy some of the nice deep snow we were finally upon, and then turned back. We faced some very slippery slopes on way down that added a bit of final adventure to our day.” 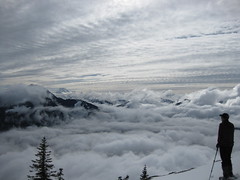