Carollyne at Elfin Lakes and beyond:
“Nima and Amir joined me for this snowshoe trip that didn’t go entirely as originally planned, but was still very rewarding. The drive up was uneventful – much of the snow had melted from the chain up area onwards and as the chain up area was empty of cars, we decided to try the rest of the drive and we made it easily with snow tires. The upper parking lot was a little jammed and the ranger doubled as a parking attendant, asking people to move their vehicles to make more room.

Along the winter route, the weather was better than the forecast, resulting in great views of big dark clouds looming over the mountains along with sunny breaks as we made our way to Elfin Shelter. The snow was a lot softer than two weeks before, requiring snowshoes while still in the trees. A very peculiar sight was a perfectly rectangular black cloud. Snow is deep enough at Elfin Shelter that the entrance is on the second floor and the main floor is more like a cave. We had a choice of bunks when we arrived, though by sunset the floor was covered with thermarests and by morning there were a few people sleeping downstairs as well. After dinner, a gorgeous sunset and orange moonrise made it hard to stay inside. Earplugs provided me a restful sleep eventually.

The next day, in brilliant sunshine, we set out for the Gargoyles and Little Diamond Head joined by a skier we met at the hut. My backcountry skier envy temporarily ceased when I saw the difficulty of negotiating tight switchbacks on the way up. However, following the route already set was still easier than breaking trail up the soft and somewhat sticky snow. Along the way, we saw recent avalanche run-outs from Columnar Peak that were within a metre of our route. Up on the saddle between Columnar and the Gargoyles we enjoyed the view, felt the amazingly cold wind from the glacier and watched another skier cut a a knee-deep track down to the pass between where we were and Little Diamond Head. Mini avalanches were falling from the north facing cornices on Columnar and we started wondering about the avalanche risk, our lack of avi equipment and tried to estimate how many hours it would take us to go down to the bottom, go back up and do the same on the return. We could see the route through the pass but could not see any tracks on the south face of Little Diamond Head. We decided to go up toward the peak of the Gargoyles to see if we could get a better view, and after being blasted with blowing snow and ice granules, ultimately decided the original plan was a bit too risky and might take too long, so we opted for a return.

We might have just psyched ourselves out, but next time I do this I’ll bring avi gear. So, our two-nighter ended up as a one-nighter with a return trip to the car with under bluebird skies. Still a great day, just not entirely as planned.” 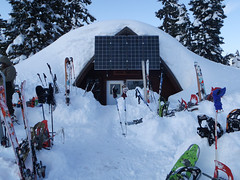