Irina on Mt Sproatt:
“Our hopes for the afternoon clearing were not in vain, as drizzle over Vancouver turned into flurries along the Rainbow Lake trail, and then gave way to patches of blue sky as we were hiking up higher.

The Rainbow Lake trail was easy to follow with multiple ski tracks. The question was: where to turn off west? Last time I was here, we turned off at the 4.5 km mark before the wooden bridge (https://www.livetrails.com/report/847/0/Mount_Sproatt). This time, we carried on further and turned off at the outhouse. Arriving at the cliff with a massive yellow icicle, we headed up the steep slope. Snowshoes provided us with good traction, but a group of skiers struggled and, after a few unsuccessful attempts at skinning up, took off their skis and were trying to bootpack up. Surprisingly, there were no tracks whatsoever past that point, and we broke trail towards the alpine, in anticipation of open skies.

Soon enough, we were out of the trees! With no apparent peak on the horizon, we continued our way along small ridges in the direction of the GPS-indicated summit. While no signs of avalanche activity were visible, the whoompfing under our feet called for frequent group discussions and conservative ascent lines. Buried below the top 20 cm of loose dry storm snow, was a 5 cm rain crust from the weekend before that was giving way. Arriving at one of the summits 4h 15min after the start, we decided to not go around all four of the seemingly identical bumps in search of the slightly higher one, but instead enjoyed the views of the Armchair Glacier, Wedge Mountain, Whistler and Blackcomb on the other side of the highway. A beautiful winter day!

We were wondering all the while where the skiers disappeared to, and got our answer after descending back into the trees. The untouched snow just above the yellow icicle cliff turned into a maze of ski tracks. The descent was a breeze: took us under 2.5 hrs from the summit to the vehicles, and that’s on snowshoes: would have been much faster on skis! Back before dark and off to the Fish’n’Chips place in Squamish. Excellent team trail-breaking and route-finding discussions made it a safe and enjoyable trip. See mine and Dan’s reports and pictures on Livetrails: https://livetrails.com/index.php?viewTrail=1&trailid=1082.” 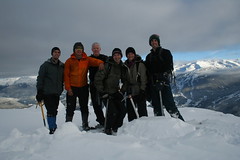 Eric at Elfin Lakes:
“Saturday morning began as a cloudy, overcast day. It didn’t get better. Three of us met the fourth in Squamish and proceeded up to the Elfin Lakes parking lot. The road was exceptionally treacherous. The fourth member attempted to drive his Corolla on snow tires up. Unfortunately he became stuck halfway up. While getting unstuck, a large line of traffic got stuck behind us, blocking our retreat. After a car and a truck ended up in the ditch, the park rangers showed up. After the better part of 3 hours pushing cars, chaining tires, and trying to not get swept off the road, the three of us left the fourth to make his own way down. We carried on in a chained up 4×4 truck having no difficulty to reach the upper parking lot. The weather got worse. Lots of snow was hampering visibility. We reached Elfin Lakes hut just before dark. (total of approx. 4 hrs travel from upper parking lot). The hut is very nice and warm. It has propane heat, stoves and lanterns. It also has solar powered LED lights that sort of work. The next morning, we toured over to the Gargoyles and got a couple runs in. Amazing light powder snow, great terrain, but some avalanche risk. We were very thankful to the party that broke an excellent track up to the col through as safe terrain as possible. After lunch we headed back to the truck. The clouds opened up and exposed the beautiful surroundings. After 3 hours we reached the parking lot (on skis, about 4 hrs on snowshoes). Driving down was slow but uneventful. We had heard, and then saw, that a Jeep without chains slid and rolled over the edge of the road. It looked to have plunged 60 feet before coming to rest in some trees upside down. Its roof was caved in and it didn’t have any glass left in the windshield. Apparently a fire truck and an ambulance were necessary. The moral of the story: don’t attempt to drive up without chains. Even if you think you will try, it is likely that you will fail. Turning around is very difficult, and dangerous. Also, if you have chains, try to get up early, to lessen the chance of getting stuck behind a large group of vehicles pretending to be toboggans.

All in all, a great trip for the three of us that made it Elfin Lakes shelter.”

Steve on the Canada West Mountain School AST-1 course:
“Ten of us joined another 22 people in a course mixing skiers and snowshoers for our AST-1 (basic avalanche) certification. At first I thought the class size was large but what it did was expose us to 4 instructors from a variety of backgrounds.

The classroom component on day one was just the right amount to hold our attention and give us the basics and then it was out to the snow on the first of 2 and amazing Seymour days!

A big thanks to John, Linda, and Steve from Canada West Mountain School for the break on price, and all of the wisdom they passed on to us! I highly recommend this course for anyone interested in winter backcountry travel. It wasn’t just educational, it was a blast!” 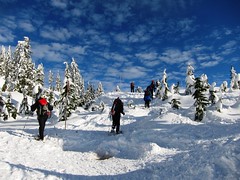 Chris M. at Pump Peak on Mt Seymour:
“Three snowshoers and 2 skiers started up Seymour at 2 pm. The parking lot was crammed but the trail wasn’t too crowded. We went up the southwest face of Pump Peak. Laurie, Irina and Dan walked and slid back down, while Glen and I enjoyed a few turns. The evening light for all of us was magnificent.” 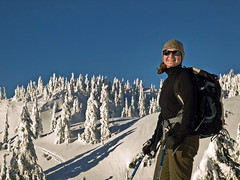