Cara on Hollyburn:
“This trip was an absolute blast! Eight of us headed up the peak under brightening skies and light snow. The fresh snow on the trees was beautiful and a nice change from the rain of the previous trip. The creeks were almost covered up, though not quite. At the peak we enjoyed a quick snack, and Giri pulled out some home made gingerbread – yum! The real fun began on the way down as we jumped, somersaulted, slid and crashed our way down the mountain. We didn’t leave much “fresh stuff” behind. We rounded out the afternoon with a quick snack at the black bear pub in lynn valley before hitting the road for home. Thank you all for an awesome trip!” 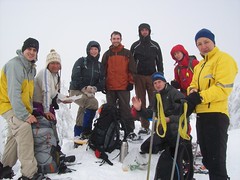 Cara on Dog Mountain:
“Zoltan, Marisa, Alex, Tom, and Gareth joined me on a fun but very wet snowshoe to Dog mountain. There was about 1 m of snow at the parking lot and it was raining heavily. The trip through the trees was beautiful, with the stream crossings still not completely covered. At the view point the wind picked up so we took a quick group shot, considered joining the crazy campers in their two-man, and beat a hasty retreat to the trees for some lunch. On the way out we detoured past First Lake and broke trail up to the junction above the parking lot. By the time we reach our cars, the rain/hail mix had turned into a determined downpour and we were completely drenched. Hot coffee provided a nice opportunity to chat before we packed up and headed home.” 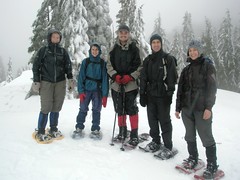 Erez on Mt Harvey:
“On Thursday, four of us: Dan, Dorothy, Rob, and myself, headed to Lions Bay to climb Mt. Harvey. It was a little cloudy in the morning, but the weather improved considerably. Snow started at around 870 m and the snow was knee-deep at around 1100 m, and more than hip-deep near the top. When we reached the ridge, clouds began to cover Howe Sound. The Lions, however, were not covered. As we continued it got even cloudier. Only two of us had snowshoes, and so the other two (me included) decided to turn back and not reach the top as it didn’t seem that the view would be better there. There was a ton of snow up there, way more than I expected. All of us reached the car at around 16:30, after about 7 hours of hiking. I hope to return to Harvey, when it’s not so cloudy. It was a very nice hike with nice company.” 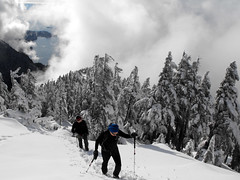 Ahmad on the Chief:
“Almost no people when we started at 10 am. It was the first time I’ve seen the Chief that empty especially on a nice day like today. Not much of a difference than it was one month ago except things seemed wetter and colder. The scramble is easy with ropes and all of us managed without a problem. The last one is difficult but the rope makes it easy. We went up also on the second peak and descended via the main trail. Dogs cannot get over the chained-steep section. We saw few dogs got stuck there. This trail is not obvious. It branches off in several places. It took us 6 hours at a luxury pace.”