Five of us started out from Surrey, and arrived at the trail head above the Coquihalla Summit in good order. Everyone was well prepared. As soon as we started hiking from the “Falls Lake” right of way, we encountered a fresh dusting of snow. Mount Thar, beside Falls Lake, all covered in snow, looked awesome! Crunch, crunch, crunch – we could hear almost every step in the inch of snow all the way to the top. It was so quiet, nothing could be heard when we stopped moving. A true winter wonderland! Along the trail, we saw fresh footprints of squirrel, rabbit, grouse, fox and wolf. However, there was no sign of the elusive “snow snug”. 🙂 Shucks! Clouds rolled though as we reached the summit. Views kept coming and going. We were envious of the sun drenched hills right across the valley to the North. The summit wasn’t a true peak. Our views to the West were obscured. We settled in at the summit, and started cooking. Ah, lunch! We began with a sweet egg pasta curry with fresh tomato and carrot, cooked up a spiced brown rice with honey glazed beef, and had a light cous-cous dabbled with mango and pineapple. We finished off the meal with green tea and yogurt covered raisins. Fantastic! We had conversations about careers, travel, and cultural comparisons. The two architects on the trip, had lots to say! Allan cracked jokes all day. Mighty Zoltan took many pictures – a true Flickr aficionado! Our return down was quick, and full of conversation. We drove down the highway to Hope and arrived at the Home Restaurant before dark. We all ate from massive plates of great food. On the plates, the piles were so big, yam fries were falling off onto the table. We learned the new term: “Mountain money.” And we discovered the value of Gore-Tex socks. This product keeps feet dry regardless of how wet footwear becomes. An awesome product for West Coast hiking.” 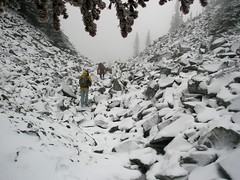 Alain at Lindsay Lake:
“On Sunday October 11th, I was joined by Allan, Chad, Cindy, Debra, Lyndon, Rob, and Robin on this very rewarding hike. We left the trailhead at Buntzen Lake just before 10:00 am. The trail ascended at a moderately steep pitch for the next couple hours before we came to a plateau upon which we passed by several small lakes, one of which had a thin sheet of ice covering it. We continued upon the plateau for approximately one hour before reaching Lindsay Lake which was very pretty and our lunch stop. We decided to make the ascent to Tangled Summit (Mount Beautiful) rather than complete the Lindsay Lake loop. The trail between Lindsay Lake and Tangled Summit does lose a fair bit of altitude before making a final steep ascent to the summit. We had been worried that we somehow ended up on the wrong trail and were headed down the mountain, but alas we were on the right path and approximately an hour and a half after leaving Lindsay Lake, we made the summit. We could not have been better rewarded with the spectacular panoramic view in clear sunny skies. We could easily see downtown Vancouver and further west to the Island, Indian Arm and across it to Deep Cove, and to the east, Coquitlam Lake just below, and further to Mount Baker. It was difficult to pry ourselves from our sunny perch, but finally we began to descend using the Swan Falls trail. While a much steeper trail than the one we ascended with, it still took about 2 1/2 hours for most of our group to reach the base of the trail at the far (North) end of Buntzen Lake which still left a 4.5 km hike along a service road to our cars. As both darkness and the closing time of the park gate were nearly upon us, one member of the group was forced to run the entire length of the 4.5 km service road in just half an hours time (with sore tired legs I might add) to flag down a BC Hydro Park attendant who agreed to pick up 6 members of our group who were at various sections of the service road, and they then enjoyed a relaxing ride back to the parking lot in the back of a pickup truck. Notwithstanding the little crisis near the end of the hike, all in all there was great satisfaction all around. Recommend allowing 10 hours if combining the Tangled Summit and Lindsay Lake hikes as we did.”

Su-Laine on Eagle Bluffs:
“Holy, is the summit of Black Mountain ever a good place for a nap. Six of us were treated to a day of ideal conditions for hiking up the Baden Powell trail from the highway to Eagle Bluffs. No snow, no ice, and minimal mud were encountered. We liked it so much that we continued the 45 minute trip to the top for the aforementioned siesta amongst the mountaintops and Howe Sound views.”

Steve on the First Brigade Trail:
“Fall is the time to do this hike. Notorious for ticks in the Summer, and with the Fall foliage, best to stick to alpine areas and reserve this for when the snow levels encroach. Whether I was out of shape or the stats were off, for some reason it seemed higher and steeper than I expected. In fact, I was questioning the popularity of this trail until we hit the forest fire remnants. This was what makes this hike unique – the open area in the midst of the former burn and foliage that is sprouting up as a result. To our surprise, where this trail meets the 1858 Trail (to Gate Mountain), there was an outhouse and picnic table! What else was really unique about this hike is that it is a loop of sorts allowing you to walk one ridge on the way out, and a different ridge on the way back (the lower half is common though). Views themselves on this trail are unique, but mediocre. We hit no snow, but there was evidence it was coming, What we did see a lot of was blowdown near the higher elevations, but it was easily stepped over and looks as if some recent cleanup efforts had been made. We went for “I Fly for Pie” for post-hike eats”

Tracy on a frosty night on Mt Frosty:
“Ten people turned out for the Mt. Frosty overnighter: Chris M. (the organizer), Tracy, Brenda, Lana, Dorothy, Lucy, Jeff, Daniel, Paige, and Sebastian. It was a beautiful Saturday morning, but decidedly nippy out as we started from the Lightning Lakes parking lot. The plan was to camp in the larch meadows, but when we reached the aptly named Frosty Camp at 12:30, we discovered it was bitterly cold and made a group decision to set up there, since we’d be able to have a fire there. After setting up camp, we continued onto the beautiful golden larch meadows. The trail was quite slick due to ice; crampons would have been nice but everyone made it in their boots.

Once in the meadows, unfortunately Chris had to turn back due to increasing flu symptoms. A few others decided to join him on the journey home, having seen what a cold night it was going to be. Chris kindly waited while everyone continued with the rest of the group to the Frosty summit. After taking in the stunning 360 degree views, we turned around; some back to camp, some back to the car with Chris.

Chris left us a plethora of treats to enjoy: wine, cookies, and Thanksgiving ham. We shivered around a campfire that barely seemed to give off any heat at all. Huddling close together, we enjoyed Chris’s treats, except for the ham, which we saved for breakfast. There was some debate over who would sleep with the ham to keep it from freezing. In the end this job fell to Jeff, I think.

We estimate it reached -15 C overnight. In the morning we hustled out of there, looking forward to getting warm. A stop at the Chilliwack airport for its famous pies finished off the outing quite nicely.

Many thanks to Chris for organizing, and so sorry he couldn’t be there to shiver in the cold with us.”

Su-Laine on Mt Strachan:
“Strachan was a delightful place to spend one of those you-have-to-get-out-there beautiful fall days. We took the advice of a fellow Wanderunger and went counterclockwise, which had the benefit of putting the more-slippery part of the trail on the uphill. We encountered about 4 cm of snow about halfway up but besides the occasional slippery rock it wasn’t a problem to walk on. As a variation on the usual route, we had lunch on the non-crowded south summit, then hiked back to the saddle and up to the north summit to take a look, and then back to the south summit to continue our counterclockwise route. Then on the way back down we cut over to the ski run which saved some time. It worked out quite nicely, giving us lots of time to take in the magnificent views at the top and the blueberries on the way down.”

Steve at Brew Lake:
“Despite many warnings of poor markings, we found this trail to be relatively easy to navigate (we assume recent markers were added, plus we had Club Tread GPS waypoints). On a great day for a Fall hike five of us traversed scree slopes and pine needle trails.

This trail marks my memory most with three images: a great view of Black Tusk, the scenic bowl containing the lake itself, and the rather unique first few km walking on train tracks.

I was not feeling 100% this day so a big thanks to my hiking companions and their patience, which kept the group together. Despite dragging my ass up there, we still managed to get back in almost exactly what 103 Hikes suggested: 7 hours. We did see a hint of a trace of snow, but had to walk on none.”

Michelle at the Lions:
“Gone away is the blue bird, here to stay is a new bird. Yep, walking in a winter wonder land. So, there’s like snow up there. We hit some snow on the trail but it wasn’t until the boulder field that the ever increasing blanket of snow and ice presented a challenge. Though negotiable, it made for slow slippery progress and the climb/decent of the ridge connecting with the HSCT proved to be a bit “interesting”. The rocky Lions themselves looked sunbathed and bare and a steady stream of people crawled like a line of ants up and down them. Our climb to the saddle provided gorgeous clear views of the city and entire lower mainland with Baker and the US beyond on one side opposite Howe Sound, the Gulf Islands, HSCT and Sunshine Coast on the other. PS: the crowds of summer evidently haven’t yet cleared on this popular trail. However, the trail itself won’t be clear for long (or at all) as the snow has already started to stick and the daylight is fading fast.”